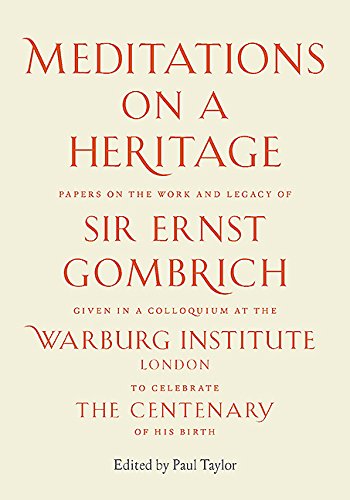 That Ernst Gombrich was one of the most important art historians of the 20th century would seem to go without saying. And so one might expect him to feature prominently in the numerous surveys, guides and introductions to the history and methods of art history produced during the past two decades. Precisely the opposite, however, is the case. One reason for this certainly was that Gombrich was an avowed enemy of big ideas, interested not in generalizations but in the specifics of individual cases. Avoiding jargon or rhetoric, standing for common sense, he always argued from clear premises, and his thought was also very wide-ranging. He never owned a subject, remarking It cannot be too often repeated that the best tribute one can pay a scholar is to take him seriously and constantly to reappraise his lines of argument .The importance of Gombrich s work on the history of taste has yet to be fully recognized, and when it comes to the application of developments in psychology to the visual arts he has remained largely, among art historians, on his own. These essays assess the nature of his empiricism, the degree to which his ideas have been adopted, overturned or developed, and his contribution to the dialogue of art and perception.
Livres Similaires