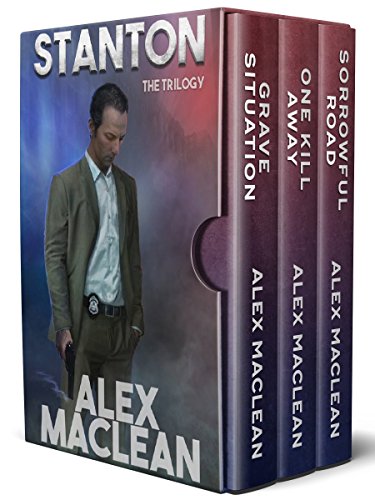 Grave Situation (Book 1) - Halifax cop Allan Stanton is a troubled homicide detective who has lost everything, including his family and his sense of justice. When he finally decides to leave the force and start over, he's assigned a string of murders that all bear the signs of a serial killer collecting trophies.
As Stanton unravels each grisly crime scene, the mounting evidence points uncomfortably close to him and a case unlike anything he’s ever seen.

One Kill Away (Book 2) - In this sequel to Grave Situation, Detective Allan Stanton has walked away from his job to reconnect with his young son—until a killer starts methodically carving his way through the city's underbelly. His ex-partner needs help, and Stanton reluctantly returns.
The killer is definitely working through a list of victims, and he's leaving cryptic clues at his grisly crime scenes. Are they there to confuse the police? Or is there something more to them? As Stanton unravels this shocking central mystery, he becomes the target of an unexpected enemy—those next on the killer's list.

Sorrowful Road (Book 3) - Detective Stanton has been haunted for the last year by one case he couldn’t close: the brutal murder of a pretty twenty-two-year-old in Point Pleasant Park. On the anniversary of her death, the body of another young woman is found. The MO suggests the same person killed them both, but the long gap between murders is unusual for a serial killer.
Fellow detective Audra Price joins Stanton in the search for this ruthless predator. But neither is prepared to handle such a unique brand of psychopath. Over a decade of unsolved case files turn up a swath of carnage, cut all across Canada with bone-chilling efficiency. The only way to bring justice to the victims is by following the most horrifying trail of their careers—to a monster who knows he’s being hunted.